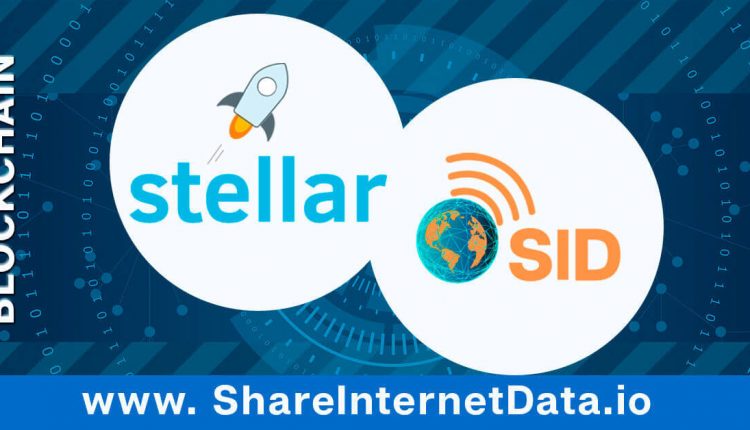 SID – Share Internet Data: how the blockchain technology can fight the poverty

When we hear about blockchain, we immediately think about bitcoin, ethereum and other cryptocurrencies. What a mistake! Crypto coins (as well as ICO and so on) should be considered as a mechanism of financing and developing a project. That is why people should start considering  the idea and the mission behind a cryptocurrency, by analysing the project itself.

Today Business and Leaders will talk about SID – Share Internet Data, that aims to enable a global internet access boom and thus help to lift certain segments of the 500 million poor people out of poverty.
We had the pleasure to meet José Merino, Chairman and Co-Founder of SID Limited and to know more about SID blockchain project. 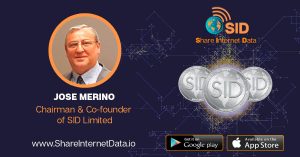 Our innovative technology aims to enable a global internet access boom by crowd-sourcing internet from users of the SID community and share it with the wider community, even to those who can´t afford to pay for it thus helping to lift certain segments of the 500 million poor out of poverty. This last is our Company mission, to support the UN´s Nr1 Sustainable Development Goal to lift people out of poverty by way of internet provisioning, because internet access means access to information and education whereas the latter education has proven to lift people out of poverty.

Internet Access has been declared a human right by the United Nations: what do you think about it?
On 12 December 2003 the United Nations World Summit on the Information Society in Geneva declared for the first time the right to internet access as a human right and since then several governments have made laws to adopt and implement some provisions towards this right to its citizens.

According to the 2016 World Development Report, 60% of the world population does not have access to internet, more than 60million people in United States did not have access to internet while in Africa only 20.7% could access internet. Price Waterhouse Cooper (PWC) in a recent report stated that if internet access can be provided to the 4.1 Billion of the population who currently don’t have access, then  more that 500 Million will be lifted out of poverty.

SID vision is to support the United Nations top SDGs (Sustainable Development Goals) focusing primarily on the #1 being  to “End poverty in all its forms everywhere”. By crowd-funding for SID – Share Internet Data this will hopefully become soon a reality at a bigger scale through SID contributing in reducing poverty by providing internet access to as many people as the company finances allows going forward. 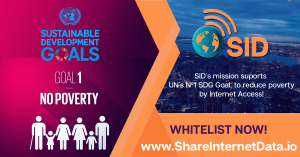 How people can use the SID token?
There are 2 different aspect to using the SID utility Token.

(i)     For the “trading of tokens for shared internet”, firstly the SID token, based on the Stellar blockchain, will be quoted on a public exchange after the ITO (initial token sale) such that all token holders can trade openly and transparently without any interference nor any control whatsoever by SID or anyone else on the public quoted tokens. This is the basic principle of decentralization where the ultimate decisions to share their internet or not are taken by the SID users themselves.

(ii)    Secondly, the SID token is, inherently through the already released SID platform and SID APPs, designed to have a utility to be used as a payment means on the SID platform. For example, already today SID smartphone users that add a working WiFi password on the SID platform through our SID APPs are being compensated in SID Tokens. Similarly, once the SID token will be quoted on a public exchange post ITO, we will activate the trading (or paying) with tokens for consumed Mobile or Private Home WiFi internet from other SID users.

My personal favorite that comes from the heart is this one; at some point in the 1st year post ITO we will also allow SID users that can´t afford even 1 cent EURO to buy a SID token to instead consume Ads and we will compensate those user in Tokens for the Ads consumed. Those users can than save tokens and use those to pay for internet shared to them by other SID smartphones nearby or from SID users Home WiFi added in future to the SID platform.

The SID market opportunity is massive, as it is combining both the smartphone and the WiFi markets all in one:

Which kind of technology did you choose and why?
In the case of SID – Share Internet Data, it was a question if the technical commercial version platform solution was even possible as the SID platform required a micro-payment system that would allow payments as low as 1 cent of a Euro. When considering an average price of say for example, to bring developing countries in line with western countries internet data pricing of 1 EURO for 1 Giga Bytes of mobile internet data and knowing that a minimum required to allow a user to send and receive texts and browse the internet even to the most basic sites is around 10 Mega Bytes (10MB). Consequently, 10MB of mobile internet data would need to be charged or traded for by the sharing SID user to another nearby SID user in example at 1 cent EURO per 10 MB data blocks and that when considering millions of users would require a platform capability of in the millions of micropayments transactions.

We were at a loss and desperate as traditional methods like bank transfers or credit or debit cards would not allow such small amount of money in such big numbers of transactions. Than we looked at the most known blockchains as Bitcoin and Ethereum and quickly concluded that the cost of transactions was abusively high and in most cases were higher than the equivalent transaction amount. Actually, the lowest transaction cost of Bitcoin and Ethereum was for Ethereum at the beginning of 2018 around $US 0.16 which is almost 16 times higher than the minimum transfer that SID micropayment is intending to allow its users. Finally, to make matters worse, the time to confirm a transaction was not instant but takes up to hours AND to finish it all off the number of transactions if we would add extra millions of transactions on top of those first mentioned blockchains would not be feasible at this point in time.

So, the conclusion was we develop our own blockchain or we select the most suitable progressive blockchain like the one SID Limited finally selected, namely Stellar. In so far as transaction costs, Stellar published figures state a cost of $US 0.01 every 100 thousand transactions (so near to a negligible cost), and they can manage 30 thousand transactions per second (= almost 2.6 million transactions per day) and clear a transaction on average in 4 to 5 seconds. That means Stellar, allows fractions of crypto tokens which are the equivalent of 1 cent EURO and at virtually no cost on a single transaction basis so is the best choice we have made to build the SID micropayment system on top of. In fairness SID would not exist if it wasn´t for the Blockchain technology, exactly for the reason explained before, so blockchain is a technology that SID simply can´t be without in the long term. So, in fact SID – Share Internet Data combines the new technologies as blockchain and our intellectual property rights to give users a real live solution to a daily issue encountered by a big portion of society, namely internet connectivity.

NowBoat, The Startup Offering Boat Vacations – in Respect of The Oceans

Business and Leaders 4 ore ago 0
Startup

Business and Leaders 2 giorni ago 0
Business